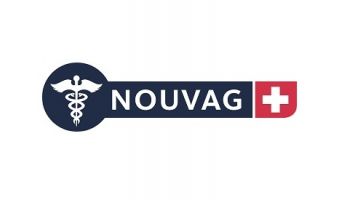 We are a dynamic, innovative and leading international company with high quality standards in the manufacture of equipment for the dental and medical technology with headquarters in Goldach on Lake Constance.


Even in those early years, his wife Berty Hutter worked hard to assist him, taking charge of accounting as well as payroll and human resources.

"without the assistance of my wife over all those years, our company wouldn’t be where it is today"
Beda Hutter about his wife

Growth in spite of recession

On July 5th 1974, the one-man company was converted into the stock corporation "NOUVAG AG". At that time, many companies had to grapple with an upcoming recession. NOUVAG AG was not only unaffected by this economic slump, but quite on the contrary saw itself confronted with the necessity of making plans for expansion, as the steadily growing volume of orders no longer permitted optimal production procedures at the site where the company was located at that time.

In 1976, the company was able to move to a new plant. Even at this early stage, Beda Hutter, the dynamic entrepreneur, had realised that successful exploitation of the market and further expansion of the company would only be possible if the company developed its own range of products. Market analysis combined with an element of intuition led NOUVAG AG to venture into the crisis-proof segment of medical technology with its excellent future potential.
Expansion and relocation to Goldach

Thanks to the superb quality of the products, the company succeeded in expanding not only its geographical market, but also its product range. Steady growth soon led to new problems with insufficient space. A planned expansion at the Rosengartenstrasse site was delayed time and again by additional legal injunctions or appeals, and so it was almost a stroke of luck when the opportunity came in 1991/92 to take over the vacant "Odol" plant complete with office building and high-rack storage facility. .

At the beginning of 1992, part of the production was moved to these facilities located in Goldach. When the Rothenstein property was purchased and the château-like mansion renovated and converted of into an administration building, relocation of the administration to Goldach, which took place in early December 1993, followed as logical consequence.
NOUVAG goes international

Around the same time, NOUVAG Deutschland GmbH was founded in Konstanz. A company branch outside of Switzerland was needed for supplying the German market and also as service point and storage facility for distribution, and the new location inside the EU was ideally suited for this.

Sales and distribution of NOUVAG products for the EU area is conducted from the branch office in Konstanz, and for the Americas from the sales office in California. In the other countries, independent sales agencies with good support and training by the parent company ensure adequate presence on the market. It should be mentioned that worldwide sales are conducted exclusively via so-called dental and medical depots. Direct sales are thus excluded.
NOUVAG AG in 2013

Today, the company employs around 75 – for the most part highly qualified – specialists. Special value is placed on comprehensive training of the approx. 8-10 apprentices. The company comprises four factories.

The administration with exhibition rooms and a professionally equipped photo-studio for taking pictures of the company’s own products is located at the company headquarters in Goldach with the "Schössli" [little château] Rothenstein, while the former "Odol" building accommodates the departments for research and prototype construction, mechanical and electronic development, quality management, sales and marketing, production and assembly as well as storage and transport facilities. The mechanical production facility, which is equipped with the most modern CNC machines, is also located at Goldach.
Leading market position

NOUVAG plays a leading role especially in the field of motor driven instruments for Micro Surgery, Laparoscopy and Dental Surgery.

Every year, around 20,000 new appliances and instruments are used by customers in over 190 countries around the globe. Thanks to intensive research and a high innovative potential, our small Swiss company has succeeded in occupying a leading market position in the specialised market niche of medical technology.

Due to ever shorter innovation cycles as well as increasingly demanding legal requirements worldwide, highly qualified specialists are needed to enable Nouvag AG to maintain the leading position in the global markets in future as well.
Financial and economic crisis

NOUVAG Co. has successfully mastered the present financial and economic crisis thanks to innovative developments of its own.
Future

Besides research, development and a production standard which meets the most stringent quality requirements, the company places greatest value on presenting a professional market image in its sales and at trade fairs.

Owner and president of the board of directors Beda Hutter is convinced that personal front-line commitment by the company director is still of great importance even today in order to establish and maintain successful business relationships.

Continued growth of NOUVAG AG in future is ensured by participation in a wide variety of trade fairs on all continents.